This year our Halloween was pretty quiet.

We did carve pumpkins, which did get a little rowdy. That's pretty much the norm though.

The boys didn't Trick or Treat this year. Connor went to a concert a few days before Halloween where his friends who are in a band were playing. He dressed up for that. The day of the concert he texted me from school and asked if we could go to "Savers" (a thrift store) after school and quickly run in and find him a costume to wear to the concert. Nothing like waiting until the last minute Con! Anyway we did pick him up after school ran to Savers and this is what he came up with. 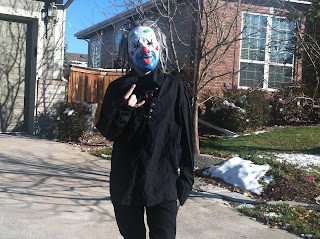 Kind of creepy, I know. But I have to say it was one of the cheapest, most painless costumes he has ever had. Connor has always loved Halloween but he drives himself (and us) crazy every year trying to come up with the perfect costume and he is never ever completely satisfied!! Anyway I guess he had fun with this one.

Alex didn't really dress up. He just got a funny hat and some furry gorilla like gloves to wear. He wore them to school. He has never been into Halloween that much, especially the dressing up part.

Alex has a real sensitivity to the smell and feel of the inside of the pumpkin. Of course his brother knows this and loves to torment him. 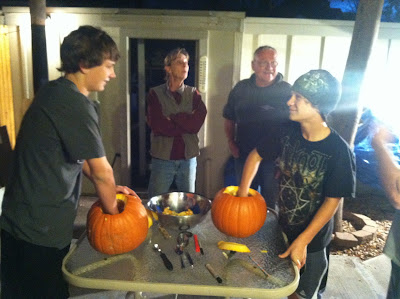 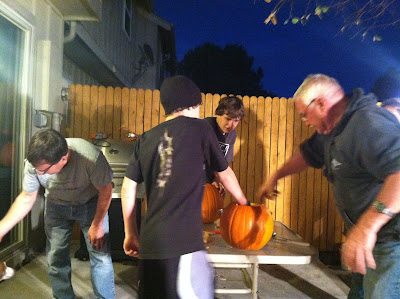 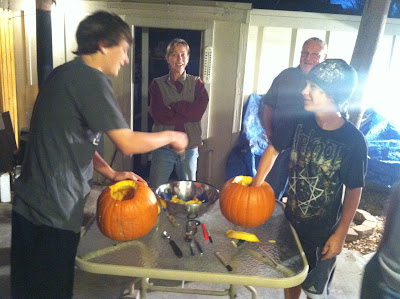 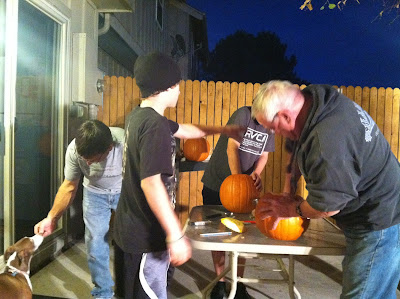 A real fight did actually break out before it was all over with but hey we got it done!

My husband my hero

A few days ago I was walking the dogs. It was about 10:30 in the morning. One of our regular stops is an area behind a grocery story that's kind of open. We like to let them off the leash and give them a chance to run.

Well, on this day there was a cat hiding in the bushes. She probably ran into the bush when she saw us coming. I didn't realize she was there. Next thing I knew the dogs found her. The poor thing was running for her life as I shouted at the dogs to stop. She ran up into a tree way up high. I hooked up the dogs and left thinking once she saw we were gone she would feel safe to come down and make her way home. I had seen this cat around a lot. A couple of times with a couple and their little kids, so I knew she had a home.

Later in the afternoon, Mark and I took the dogs for another walk. This was about 4:00pm. I was telling Mark the story of the cat as we approached the same area where the dogs had chased her. I pointed up into the tree telling him that was where she ended up and I couldn't believe it when I saw she was in the same spot!! My heart sank. I was hoping maybe we spooked her and she just ran up but by the way she looked I feared she had been up there since this morning. It was really high and the branches were a little small. Mark and I agreed that we would go run our errands and come back by in about an hour, if she was still up there we would know she had been there all along and try to figure out a way to help her down.

Well a little later we drove by and she was still there, by now she'd probably been there for 6-7 hours. 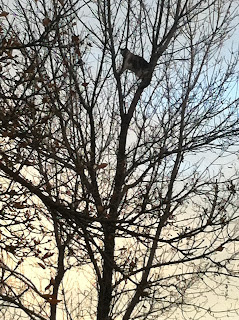 So I asked Mark what we should do. I asked if people really called the Fire Department to rescue cats from trees or was that just something you read in sweet children's stories? If I recall, he just looked at me like "we are not calling 911". I guess we could have called animal control. I said I would start going door to door to try to find the cats owner and maybe they could get her down. Mark said "no" and that he would climb up and get her. Now I was worried about the cat AND HIM!! But up he went. 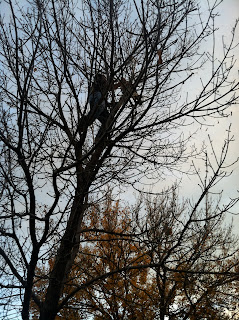 It was not an easy task. The Cat was of course frightened to death and kept clutching the branches. At the same time Mark was trying to keep his balance and not let the cat claw him. On top of everything, Mark is very allergic to cats. Anyway, slowly but surely they both made their way down. 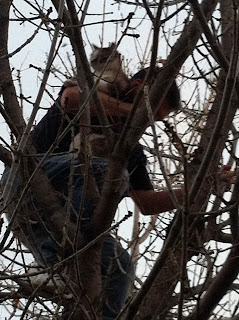 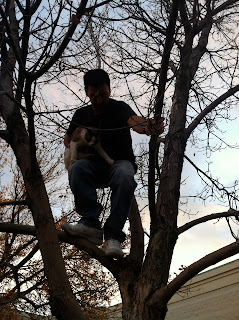 Mark tossed her into my arms and I gently placed her on the ground. She cautiously started walking away. Slow and stiff and first and then took out running for home.

Mark and the cat made it out unscathed (except for a couple little scratches on Mark's arm).

And that is one of the many many reasons my husband is my hero :)

Email ThisBlogThis!Share to TwitterShare to FacebookShare to Pinterest
Labels: Mark

Do you remember a few years ago when Connor went to Outdoor Ed? You can look back at those pictures HERE. 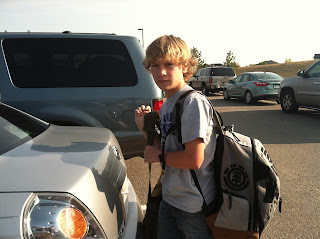 I dropped Alex off at the school in the morning so that he could board the bus that would take him to Estes Park where he would spend 2 1/2 days.

I was excited for him and a little nervous to be sending my "little boy" (yeah right) off into the wilderness by himself. A few days before, he and I had taken our handy dandy "packing list" and off we went.

1. Hiking boots? Check (which he hardly even wore.. I couldn't have picked that one)

3. Rain poncho? Check (another item I was sure would never see the light of day or rain as it were, haha, there is just nothing cool about a rain poncho for a 12 yr old boy)

4. Whistle? Check!! (My favorite item. I have always been terrified of losing a child in the wilderness, I think that would be one of the worst things that could happen, of course he thought it was the silliest thing ever to have to wear it, even after I explained how it could come in handy. I don't think he was convinced but at least he took it)

5. Two (yes two) disposable cameras? Check! (Mark and I agreed we would probably not see any pictures and would be surprised if the camera's made it home, but hey it was on the list and who knows he might surprise us.)

6. A silent reading book? Check! (This had to be my favorite. Can you imagine 5-6 boys in a room by themselves, up in the mountains, taking time for silent reading??) I think I literally laughed out loud when I read that one.  Although Alex told me that one boy (bless his heart) did want to read and continually asked the others to quiet down so he could read. This is the same boy who wanted lights out at 7 pm because he was tired. I would have to guess he was probably good and wore his rain poncho and brushed his teeth at least twice a day every day too. (Probably even let his dear mom walk him to the bus and not drop him in the parking lot, more on this below).

7. Deodorant? Check!!  (I think this one was actually underlined! HAHA. Again imagine 5-6 boys in a room after a day of hiking and running around. I may or may not have reminded Alex of this several times to which he finally said "Mom, you are repeating yourself"!! Okay, it's just that as much as I love you.......you stink)

So now he was ready. I took off work a couple of hours so I could take him to the school where they were all meeting up to get on the bus. As I pulled into the parking lot I noticed that some parents were walking their kids to the buses, others just dropping off. I told Alex I would park and walk him to the bus (ok I admit, I said it mostly for his reaction, haha) I knew good and well he wouldn't want me walking him to the bus and hugging him good bye in front of everyone. Something about 12 year old boys (at least mine) they don't like their Mom's hanging around. Anyway, I relented and pulled in to a spot near the back so no one would see me giving him a hug. I was really doing just fine with everything until I went to hug him and he stopped mid embrace and looked at me and said "Hey Mom, I'm taller than you"!  Then came the waterworks. I guess it was all I had in me to not dwell too much on the fact that going off on his own on his first middle school trip meant he was growing up. But then for him to say that. Anyway, he looked at me kind of funny like "why are you crying mom"?  He slowly backed up and waved and said "Well....bye mom" and walked away. Just left me there looking like a crazy person with tears rolling down my face!

I have a feeling he was thinking that he didn't know what his crazy mom's problem was but he had to get away before one of his friends saw what was unfolding. LOL!

Maybe one day, when he has kids of his own, he can look back and understand what all the hubbub was about, or maybe not. Either way kiddo, you are stuck with me.

Turns out he had a great time. When I picked him up at the end, he dove in right away, animatedly telling me all about it! Not even one mention about my breakdown ;)

Unfortunately he didn't get any pictures (who would have guessed that one ?)

He chose to "hang out" with friends most of the day. Then Grandma and Grandpa took us out to dinner  at Red Lobster (Alex's choice). Mark was out of town so unfortunately he wasn't there but we had a really nice dinner. 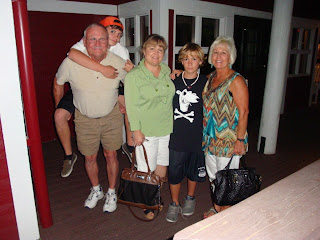 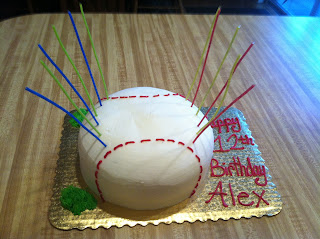 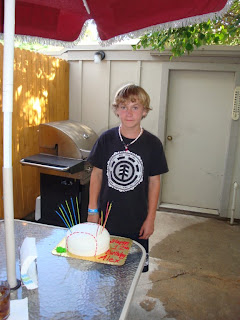 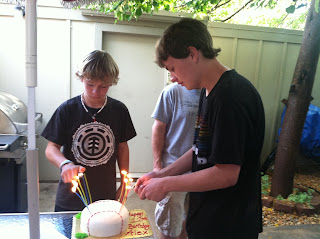 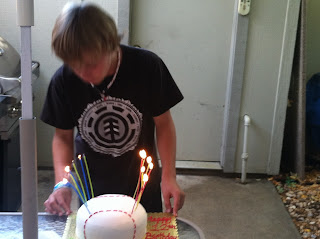 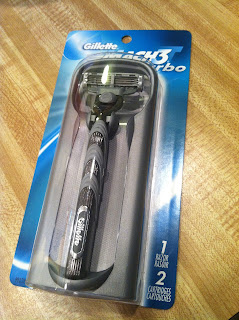 A few weeks ago the boys were getting ready for school. I overheard  Connor telling Mark that he needed to shave. My ears perked up. I heard them discussing it and Mark helping him and giving him instructions on the proper way to shave.  The next day Mark came home with this razor so Connor could have his very own.

I know it sounds like a little thing and I am aware I can be a little overly sentimental but these are the kinds of  milestones I would think about when Mark was fighting for his life. There were times when I was afraid he wouldn't be here to teach the boys these kinds of things.

I'm so grateful he is. 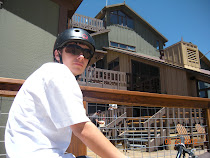 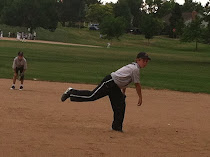 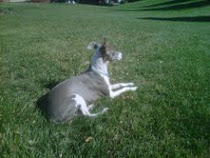 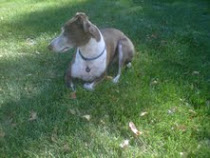